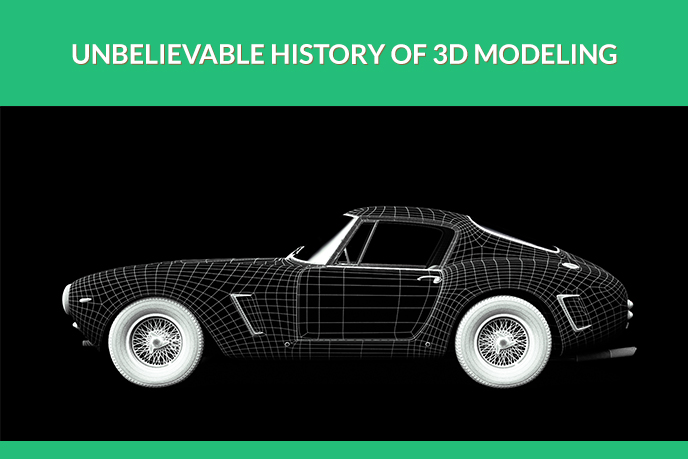 HISTORY OF 3D MODELING: FROM EUCLID TO 3D PRINTING

History of 3D modeling went through many developments on its way to being wrapped around our everyday lives. These developments range from nebulous theories to better user experiences in highly customizable software, but each of them contributed extensively to the technology as we see it nowadays.

Knowing these will grant a better understanding of the value of 3D modeling, what it has already achieved and what the future holds. For it is easy to see why 3D modeling and rendering is taking over the world today. Its effect is immense – it just might just happen that you aren’t aware that 3D modeling shapes your professional and everyday life. So let’s look over the points in time which launched a whole industry and enhanced our workflows and advertisements. 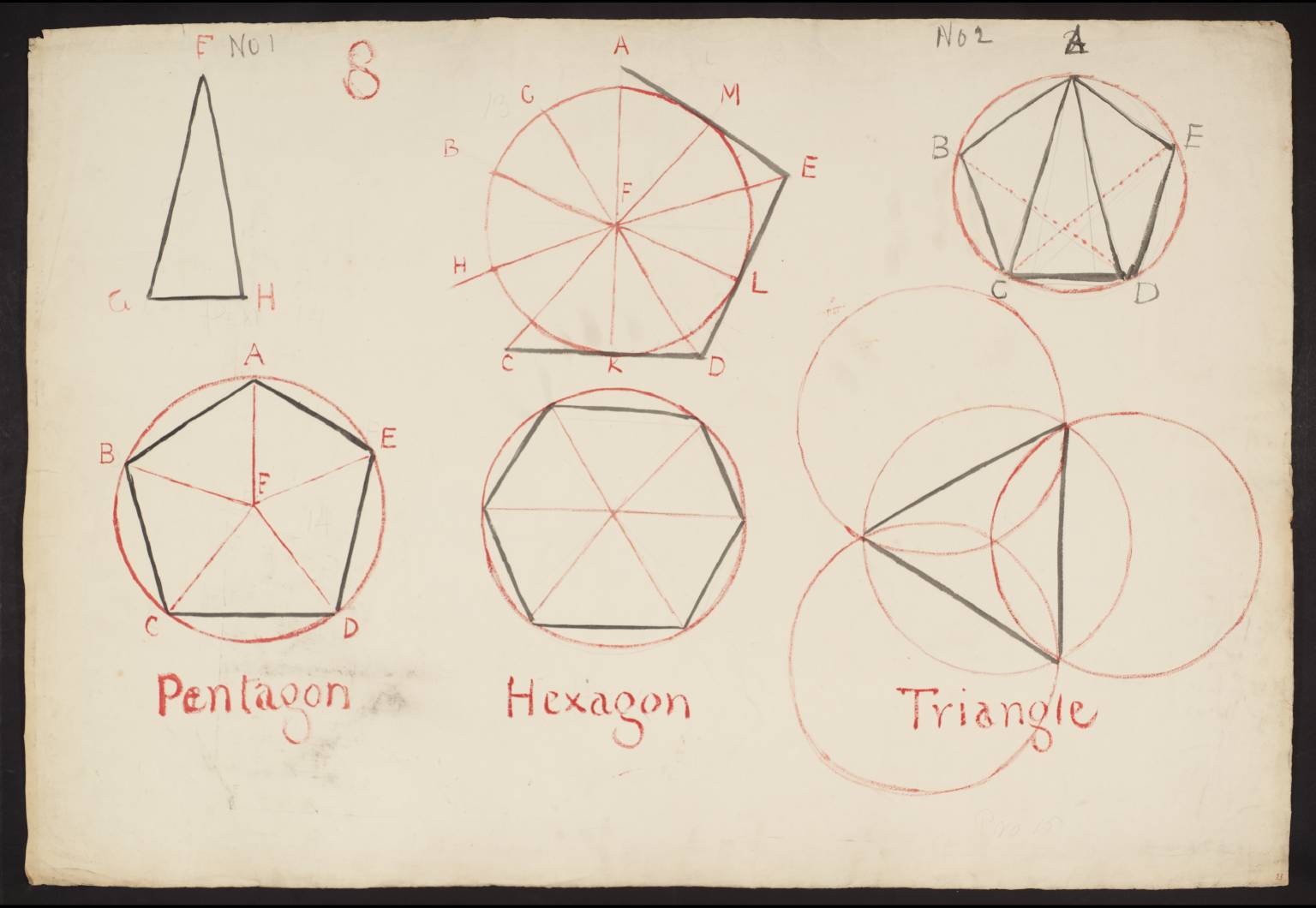 Paradoxically, the history of 3D modeling began way before the first PC appeared. It all started with mathematical ideas that are behind 3D visualization. In fact, some of the basic ideas came from Euclid, sometimes referred to as the “founder of geometry”, who lived in the 3rd century BC. Then, Rene Descartes in the 1600s gave the world analytic geometry, also known as coordinate geometry, which allowed to accurately track distances and locations. Later in the mid 18th century, English mathematician James Joseph Sylvester invented matrix mathematics which is now at work for every computer-generated image where one can see reflections or light distortion.

In the 1950s, computers were developed and put to many mathematical uses – mainly military and scientific, but not much else. Fortunately, this led to the day in history when someone thought of putting one to do a realistic simulation of products and designs. 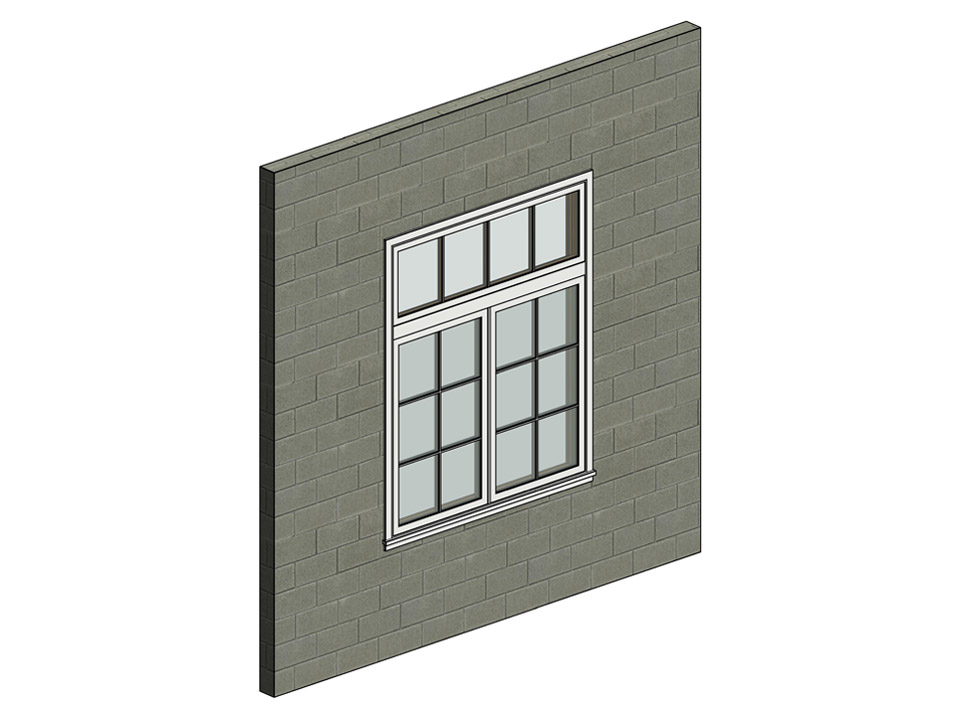 The first advancements in the history of 3D modeling came when the first commercially available CAD or Computer Aided Design systems started coming out in the 1960s. The biggest breakthrough came from Ivan Sutherland who introduced Sketchpad, also known as “Robot Draftsman,” in 1963 with its revolutionary interface. Sketchpad established that computers can be used not only for engineering or repetitive drafting but interactively by Designers and potentially Artists.

In the same year, the General Motors and IBM partnership created the DAC-1, Design Augmented by Computer, which was publicly presented in 1964 and used by General Motors for the rest of the decade to speed up their car production workflow. It demonstrated that computer design visualization can cut down workloads which would’ve taken forever if the drawing boards were used.

At the end of the decade, in 1968, Ivan Sutherland and David Evans founded the first 3D graphics company, “Evans & Sutherland”. They started the company to produce hardware to run the systems that were being developed but were soon also developing software. Their appearance and success in the market inspired others to start up their own companies and work on developing the technology. 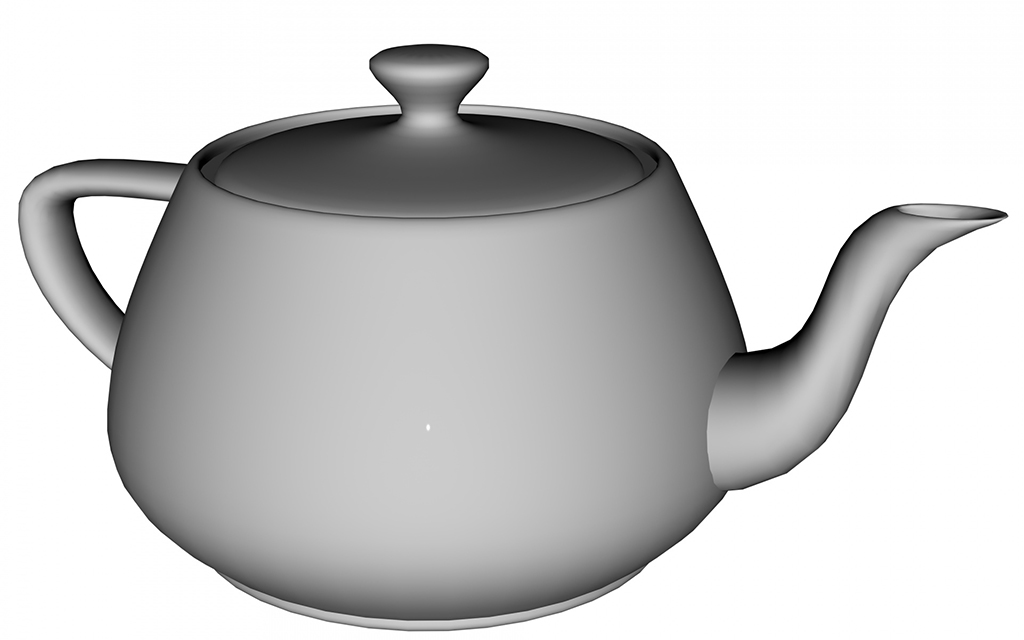 At this point in the history of 3D modeling, new companies began to offer automated design and drafting systems. ADAM, a CAD system released in 1971, was one of those. ADAM was designed to work on as many machines as possible, thus creating a huge spike in the availability of CAD which continued as computers and software grew more sophisticated.

While companies such as MAGI, who introduced solid 3D modeling, were creating new demand for CAD, universities were hard at work to advance the history of 3D modeling and discover newer and more efficient technologies to visualize 3D models. Gouraud and Phong discovered techniques for shading at the University of Utah which sped up processing by simplifying the original algorithms for rendering and delivered better visual results in light, reflection and shading.

An item of interest was the Utah teapot model. It appeared in history as the symbol for 3D computer graphics after it was used by Martin Newell to test his graphical research. He found the 3D teapot model ideal for testing because of its structure, variety of surfaces it possessed and the item’s ability to cast shadows on itself. He shared the details with his fellow researchers who immediately started to use the teapot too. 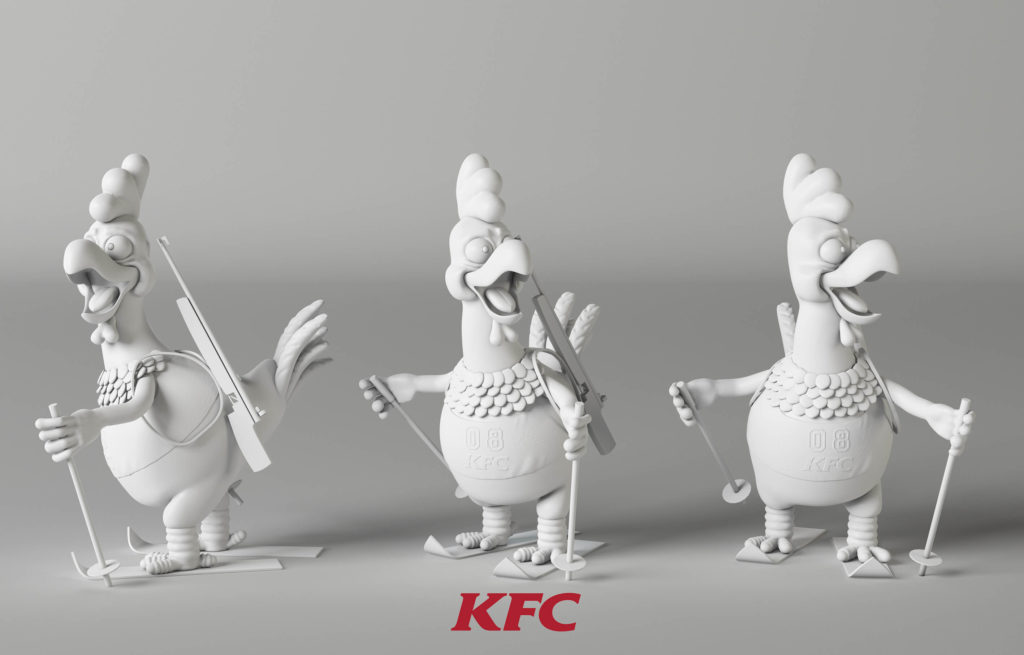 The introduction of the first IBM PC in 1981 caused a widespread use of CAD in not only aerospace and automotive industries but also in commercial engineering businesses. This was also boosted by the introduction of the UNIX workstations which were cheaper, highly productive and required less maintenance. Solid 3D modeling then developed and became mainstream with the development of software such as Unigraphics’ UniSolids CAD.

Later, In 1983, the 2D system AutoCAD was released. It was the first significant CAD program in the history of 3D modeling for the IBM PC, as it offered almost as much functionality of other CAD programs to date but at 20% of their cost. But they were not dominating the market for long because commercial CAD systems were showing up in aerospace, automotive, and other industries throughout the rest of the decade. These industries were also helped by the introduction of IGES, a vendor neutral file format, letting users transfer 3D design between different CAD software. 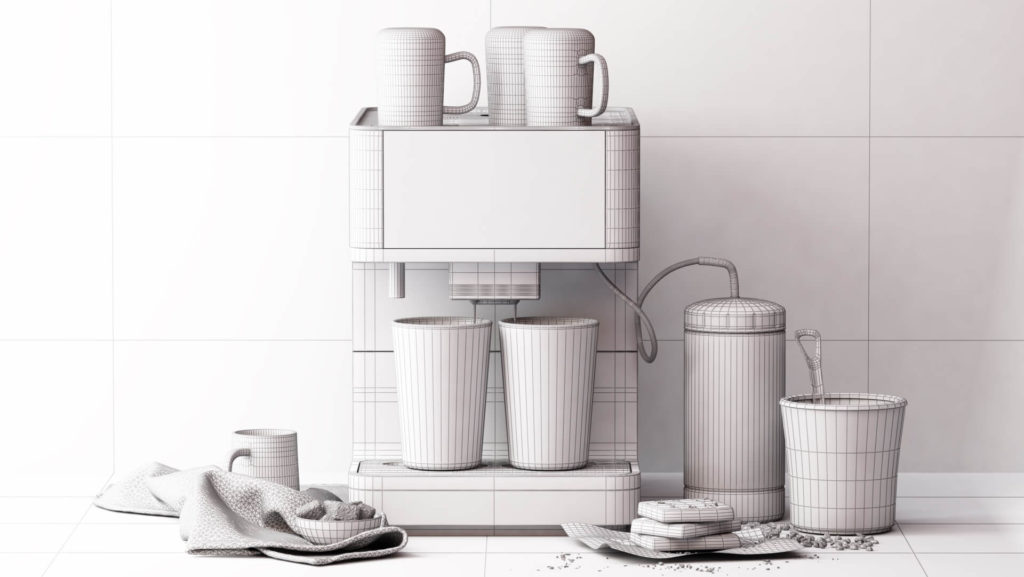 At this point in the history of 3D modeling, CAD software was widespread and being tested to its limits. It was now easier and cheaper to access professional programs and hardware allowing for any company, freelancer and hobbyist to create 3D models. The software was now constantly developing and changing, allowing for faster access and a more user-friendly experience. Changes like IGES being replaced with STEP made the file format more reliable, while AutoCAD and Solidworks upgrades boosted potential results while cutting pricing by thousands of dollars.

Meanwhile, free and open source software like Blender were popping up, so people fascinated with 3D learned and tried modeling for themselves. Popularization ensued as the internet got flooded by hobbyists creating their work and even selling it – all leading up to where we are now. 3D modeling for printing was developed to account for the interest magazines had in using 3D models for articles.

#6. The Emergence Of 3D Printing 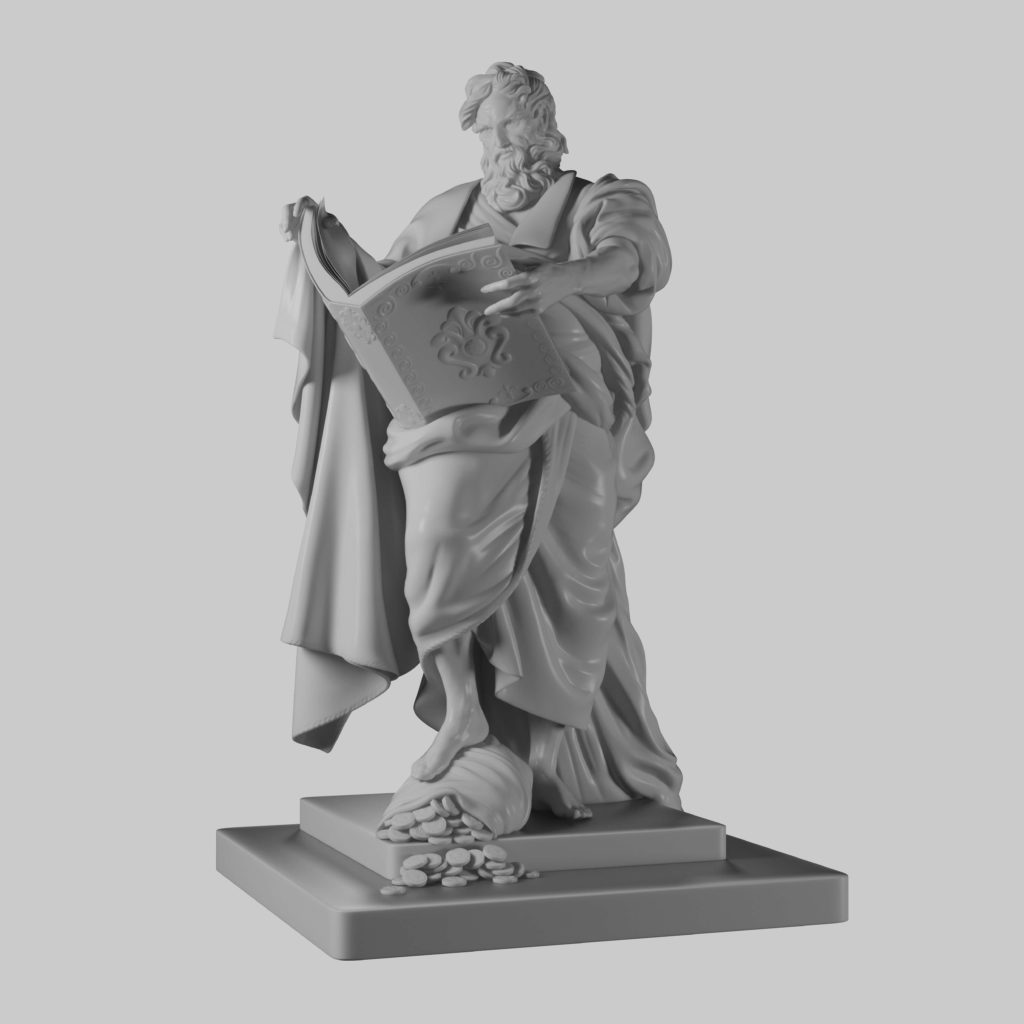 A separate part of the history of 3D modeling is the invention of SLA or stereolithography, the production parts in a layer by layer fashion. It was thought up in 1984 although the first machine that utilized it came out in 1992. This SLA machine used an acrylic-based material named photopolymer. It gets hit with a UV laser to turn it into solid plastic. That same year another machine came out with its own version which used powder instead of liquid and was dubbed as SLS for selective laser sintering.

At this point in the history of 3D modeling, all this was very new and companies were only realizing the potential of such technology. It was still expensive and had its flaws, such as warping of materials during printing. A lot of prototyping and developments ensued, especially in the field of medicine where startups fabricated organs and prosthetics using 3D printing technology. The big explosion happened in 1999 when the first 3D printed organ was implanted in a person, a synthetic bladder.

As history went on, new possibilities opened up with the expansion of the internet. In 2005, an open source 3D printing project, RepRap, was funded through supporters on the web. It was successfully developed and released in 2008. Dubbed “Darwin”, the 3D printer was able to print most of its own parts through the use of different filaments which could be easily ordered. This sparked major hype and enthusiasm for 3D printing, as people realized that anything they could think of could be printed right at home, even the printer.

Following this huge spark of interest, Kickstarter funded countless 3D printing projects. These publicly funded projects brought about the flexibility and affordability that 3D printing now possesses. There are countless amazing stories about what 3D printing has done and is able to do today. They come from manufacturing housing and small precise electronics to organs and prosthetics. But there is no way to cover everything here, not to mention that the 3D modeling expansion will keep progressing from the date of this article!

The whole history of 3D modeling came out of many mathematicians precisely describing the process of making and tracking geometry. This was found highly applicable in computers which, after some research, it was found to produce incredibly useful visualizations. Now with the development in this technology, 3D modeling and visualization are widely available and affordable as ever. Not only that, the photorealism it produces can be hard to tell from reality, and can even be 3D printed into reality Now, isn’t it a fascinating path?

So we really feel privileged to work with 3D modeling and rendering and witness many ways it transforms our lives. We’ve been working in the field since 2011! Need high-quality 3D models and renders? Contact UFO3D 3D modeling service: we’ll deliver the 3D models of any type and complexity, with timeliness guarantee available and comfortable workflow.

One Comment on “HISTORY OF 3D MODELING: FROM EUCLID TO 3D PRINTING”